REVIEW: Love is a Fire by Lyssa Layne 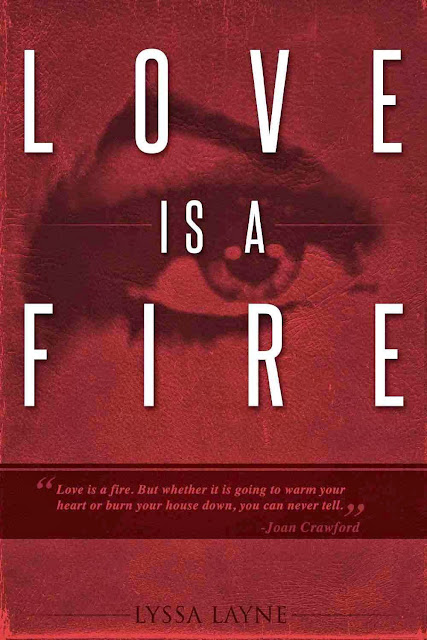 SYNOPSIS
Dr. Katy Malone has sworn off love after losing those she loves most in her life including her father, a member of the FDNY. She has decided to spend her time focusing on her medical research. Her ex-fiancé, and fellow doctor, isn’t ready to give up on loving her though.
Firefighter Nick Garrity is on a search for the future Mrs. Garrity. As he pushes thirty, with no prospects in sight, he’s afraid he’ll never find her. A devoted member of FDNY, he loves the thrill of his job and the satisfaction it brings him. He strives to teach the proby firefighter the ropes and pass on his passion to him.
When the proby tries to impress the guys on the crew, he ends up in the care of Dr. Katy Malone. One look at Dr. Malone and Nick knows he’s found his future wife, but can he convince her to love again?

I'm going to be completely honest. I could not put this book down. I got sucked in by the great story of Nick and Katy. I got angry when Katy did, rolled my eyes when Nick acted like such a guy, and cried my eyes out along the way. I can not in good faith say that this book is for everyone. I live the brotherhood of the fire dept everyday. Those with husbands, brothers, fathers and lovers in the fire world you'll know whether you can handle it or not.

He grinned as he kissed her. He'd told her that he'd never be satisfied with all the kisses they exchanged. He'd always want just one more and she had to agree with him. "I like the way you think."


EXCERPT
At mile four, Katy turned around as he lagged fifty feet back. She was going to ask if he wanted to push their run to seven miles, but seeing him huffing and puffing, she figured she already knew the answer. She jogged in place until he caught up. He saw her waiting and slowed to walk. Smirking, she questioned, “Thought you could hang for five miles?”In between breaths, he mumbled, “I...didn’t...know we were...going to be...running record pace.”Katy laughed. “Come on, macho man, it’s barely a seven minute mile.” She playfully punched his arm giving him a hard time.Nick stood up having caught his breath. “Macho man, huh?” He reached out and in one swipe picked her up and threw her over his shoulder.Katy giggled as he carried her down the path then set her down. It was the second time in the span of a few hours that she’d laughed like a schoolgirl which was two times more than the past two years.  As her feet touched the ground, he let his hands linger on her waist. Even though they’d just met, the chemistry between them was undeniable.Standing almost a foot taller than her, he leaned down to get a better look at her face. Katy’s heart did a somersault as she thought that he was going to kiss her. She jumped back stepping on a patch of ice. She looked like a cartoon character as her feet skidded and she ran in place trying to get her balance. Nick reached out to steady her and as she leaned into him, he caught the ice patch too. They both landed in a puddle of ice cold water.Nick landed on his back with Katy on top of him. He had his arms wrapped around her tightly and despite the fact that the water was Arctic temperatures, she felt warm all over as she lay on him. She enjoyed the safety of his arms around her and her hormones were going crazy as she took in his scent. He was definitely wearing Paul Sebastian, it was a scent she had grown accustomed to since it was the cologne Jeremiah wore. As Katy lay on top of him reminiscing, she felt him shake her frantically.“Katy, Katy, are you okay? Oh my gosh, I’m so sorry. That was my fault.” Katy snapped back to reality. She realized she had him pinned down in the freezing water, although he was twice her size and could have moved her at any time he wanted.She jumped up and offered her hand to him apologizing. He stood up laughing and pulled her into his arms, rubbing his hands up and down her arms trying to warm her up. “Was that your plan? Bring me to the park and take advantage of me?” he teased.She stood in their embrace thinking she could get used to being in his arms and then pulled back. “I’m sorry, Nick, but I can’t do this.”He looked at her confused. “Do what?”“This. It’s just that...I don’t date. Especially not firefighters.

AUTHOR
Lyssa Layne is first, and foremost, the proud momma to her precious daughter, AR. In addition to working full-time and being a mommy to AR, she is also an avid St. Louis Cardinals fan, a runner, blogger, and an infertility survivor.
Having watched one too many medical dramas and being inspired by author Rachelle Ayala, who introduced her to the world of indie writing, Lyssa decided to try her hand at writing a romance story. Her attempt turned into the Burning Lovesick series. You can find Lyssa’s own interests throughout her stories although all stories are fictional.
SOCIAL LINKS
Blog: http://www.lyssalayne.wordpress.com.
Twitter: @layne_lyssa
Facebook: https://www.facebook.com/lyssalayne
Don’t forget to add Love is a Fire to your bookshelf on Goodreads!
https://www.goodreads.com/book/show/22365326-love-is-a-fire?from_search=true